You can read about the details of my escape from the corporate rate race here, and yesterday I updated my Escape cartoon so that it’s a bit clearer and in colour. 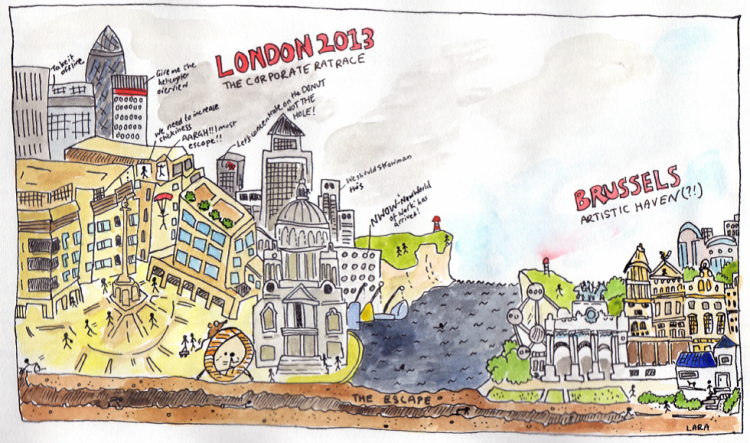 So far it’s been 538 days that I’ve managed to avoid the rat authorities in my Belgian hideaway. In that time,  I’ve set up this website, sold a painting, done several commissions of paintings/cartoons, had an ongoing exhibition of  a number of my paintings, completed an Artathon which raised over £600 for charity and started a cartoon series. Which I think is fairly good going, but I must keep it up to avoid having to go back to the corporate world and spout meaningless jargon!

My arms have also improved during my escape. From summer 2013 when the RSI (Repetitive Strain Injury/overuse injury) in my arms was so bad I was struggling to eat because holding cutlery was too tiring and painful, I can now do so much more with them. I miss being as strong as I once was (I still can’t lift very much shopping, or a weekend overnight bag for any amount of time, and typing for more than half an hour or so is painful by the end of the day) but I can paint or draw for a few hours a day and go swimming, and cook (I can chop sweet potatoes again!)  and hold a book open to read and even help build IKEA furniture without pain! I don’t want to know how many physio sessions I’ve had, or how many arm exercises I’ve done and still need to do, but I’ve started to have dreams where I can climb things now, whereas before even in my dreams my arms wouldn’t work properly, so I think things are definitely on the mend and they have all been worth it.

I’ve also managed to meet the love of my life and get knocked up and engaged whilst on the run, which I think obviously has to do with a) meeting the right person but also  b) being me. An injured me, but not the somewhat mental person I’d become in London tearing myself in half doing a job that I didn’t really care about that was not going in any direction that I wanted it to go.